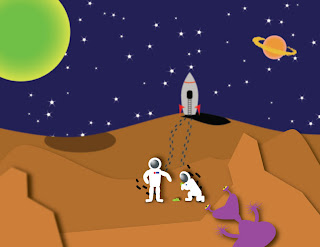 I rather like this little outer space scene, it was fun to put together the various layers and then add blurs and drop shadows where appropriate. I'm really liking the inner glow effect on the star and planet; I used that in the last assignment and decided to repeat it here. I also created a "moonboots" brush to add the footprints from the spaceship. I tried using the Width tool to widen them as they got closer, but I don't think it was working the way I imagined it. The astronauts took some time to create--it reminded me of building the puppet animation in Flash, piecing them together with shapes. I did the same thing with the alien. To me, it's a lot easier than drawing it all out!
Posted by BarbD at 5:41 PM No comments: 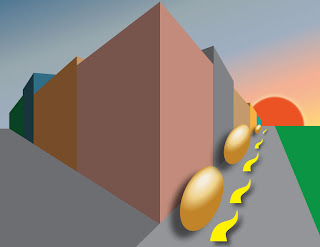 So the object of this assignment was...depth and dynamics! I tried to create depth by using the Perspective tool and drawing primitive buildings along the planes, adding the road and sun/sky. Then I created some dynamics by drawing curved lines for the road dashes, using the Width tool to widen them out a bit at the bottom, and adding drop shadows so they kind of "snake" along the road. I don't really like the ovals; I guess they're supposed to be some kind of vehicle? Whatever..it's abstract, right? Not one of my favorites!
Posted by BarbD at 3:48 PM No comments: 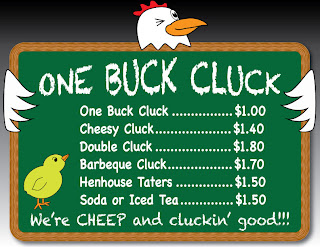 I like doing menus and this was a fun concept: One Buck Cluck! This was really the first idea that popped into my mind and I decided it would work nicely. I found some chicken images (since I can't draw well without some kind of template for guidance) and used the parts I needed: head and wings. The chick was super easy; I just used shapes for the body and feet, then Unite in Pathfinder, drawing in the wing, eye and beak. I knew I wanted the chicken holding a frame, but it wasn't until I had the frame in place that I decided to make it a chalkboard, using, appropriately enough, Chalkduster font for the header. I decided to use regular Chalkboard for the menu items, as it is a bit more readable. Added my tagline on the bottom, and there you go!
Posted by BarbD at 5:52 PM No comments: 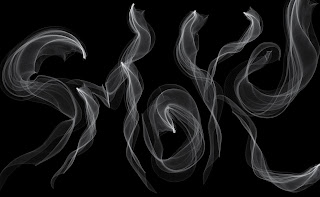 So this is my take on creating a "smoke" brush in Illustrator, spelling out (what else?) SMOKE! The process was fairly simple, although for some reason I had to redraw my original "plume", because when I tried to apply the Envelope Distort, it was not creating a smoky effect, just blended lines within the plume shape. Don't know what was going on there, but when I deleted and created a new shape, it worked fine. This could be fun within an illustration; I'd like to try making some shapes or drawings with it.
Posted by BarbD at 4:07 PM No comments: 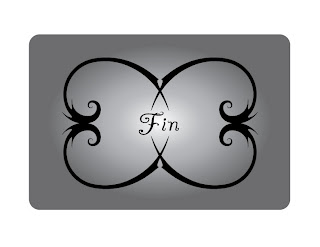 I wasn't too enthusiastic about this assignment at first; why build a flourish when there are so many already out there? It ended up being a lot of fun to experiment with. For this first flourish, I used the Spiral tool (awesome!) and applied an arrow brush to the stroke. I quite liked the curled, spiky effect it gave me, and reflected it horizontally with Effect>Transform. After I expanded that, I reflected it again, vertically, to create what seemed to be a frame. French movie ending credit just popped into my head, so that's what I created! 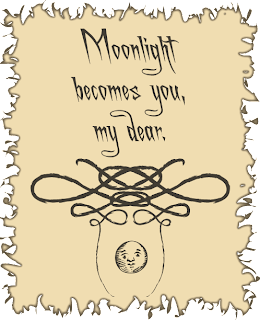 Spiral flourishes were just too easy, so for my second one, I decided to draw it. I used my new Bamboo tablet and just started playing around with drawing a classic curly flourish. I found that when Effect>Transform has been used, it is still in effect when you start painting with the Brush tool. So as I was creating the stroke, it was reflecting! I created something I liked relatively quickly, then refined the shapes by adjusting individual points and applying an artistic brush to it. Since it was kind of rustic looking, I found a woodcut style dingbat that I liked, and based on that, added the "moonlight" text off the top of my head. The final touch was applying a parchment-looking graphic style to a background rectangle, then matching the color in the text and flourish stroke.
Posted by BarbD at 12:12 PM No comments:

This was a pretty easy assignment: create two specifically-sized web ads, one horizontal, one vertical. Horizontal was super easy; the only tricky part was repurposing elements for the vertical. I didn't want to just  rotate the horizontal elements, as that can be difficult for people to read. I simply placed the text and logo a little differently and pulled out one of the "cat eyes" to add a little visual interest at the top. (This is a real business, if you have need of some quality posts for your little furry friends! I desperately need to redesign the website, though...)
Posted by BarbD at 12:28 PM No comments: 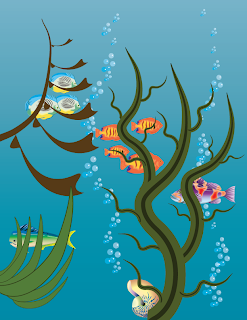 This assignment was to incorporate SOMEthing using the Variable Width tool. I used it to create the basic shapes of each seaweed, made those basic shapes into Art brushes, then built the seaweed with the new brushes. The fish are Symbols, with a little Bubble scatter brush thrown in for fun!
Posted by BarbD at 1:23 PM 1 comment: 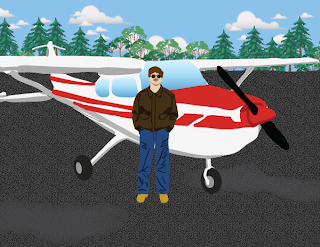 This image was created mainly by using the "Blob" brush in Illustrator. I hadn't used it before; what it does is create a fill when you're done painting with one color. As opposed to the Brush tool, which creates individual strokes. What's nice about the Blob brush is that if you're adding to an area with the same color, it automatically joins with the previous strokes to create one filled area. You can apply gradients or gradient meshes to your filled areas. I added some trees and clouds using the Symbol sprayer.  Fun!!!
Posted by BarbD at 4:22 PM No comments: 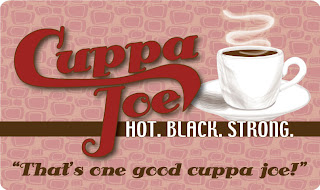 This assignment was to create a coffee ad, using the Bristle brush tool in the ad somewhere. I chose to use it only on the cup itself. I really need a lot more practice using a graphics tablet! I sprung for a basic Bamboo tablet, and it is fun to use, but feels awkward, since I'm not used to it. The shading on the cup is not great, but not too terrible, either? (Especially if you don't look too close!) I like the rest of the ad; I searched forever to find a "retro" patterns I liked for the background. I then used that red color for the logo and figured a nice coffee brown would coordinate well. I'm not entirely happy with the curve coming off the capital C, but I had to finish up. For some reason, I really spent a lot of time overthinking the ad part!
Posted by BarbD at 4:12 PM No comments: