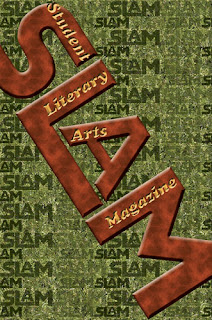 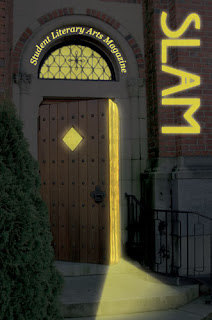 For the SLAM covers, I wanted to do two really different treatments and I think I succeeded. I started in Illustrator with the plainer logo treatment on the left, but of course I had to bring it into Photoshop to jazz it up. I got the idea to do a pattern of the "SLAM" type as a background, and then by working my way through some of the PS patterns to add to it and use on the large SLAM, it eventually took shape. I guess I want it to look kind of like an engraved sculpture against grass.  I think it turned out pretty interesting and different from what I have seen on previous covers.
The one on the right is my favorite, though. I had the idea of the doorway that's actually a book, spilling out light. I went on a photo shoot for some interesting doors and found this one. I spent a lot of time on this design, as I had to "open" the door by selecting it, copying to a new layer, and distorting so it looks like it's opening. I then added the pages image on a separate layer and created the light by using the polygonal lasso tool to draw the shapes, filling them with yellow, and adding and adjusting the glow. I darkened the image with a black fill, adjusted for opacity, and use a layer mask to knock out the glowing areas. I continued the glow theme on the text, so it would really stand out on the darkened image. Overall, I'm very happy with the final image, but it did take a lot of time!
Posted by BarbD at 3:16 PM